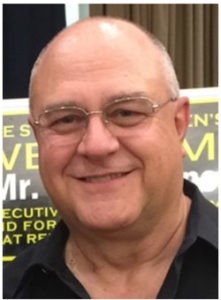 Longstanding IFSCC supporter Joseph (Joe) Peter Pavlichko, passed away peacefully on 28 March 28 2019 with his beloved wife by his side. Joe was 68.

He was born in Jersey City, N.J. on 7 November 1950 to Peter and Angeline Pavlichko, the youngest of four children. He graduated from Dickinson High School and Jersey City State College, and took graduate school classes at Rutgers University in New Brunswick.

On 27 May 1972 Joe married his high school sweetheart, Deborah Patello. They moved to South River, then Helmetta, and had two children, Michael and Matthew.

Joe worked for 30 years as a chemist at Amerchol Corporation in Edison, then was Vice President of Marketing for Croda Inc, also in Edison, for several years before retiring in 2014. He is the holder of many patents for his work at both companies and highly respected in his field.
While at Amerchol, in 2000 he served as the 55th President of the US Society of Cosmetic Chemists. He joined the IFSCC Praesidium in October 1996, in Sydney, Australia, as a Praesidium Appointee: Congress/Conference Coordinator. He later became Publication Chair, then Honorary Auditor and served on the Presidential Track. While at Croda, in 2004 Joe became the 46th IFSCC President when the US Society hosted the 2004 IFSCC Congress. His term on the Praesidium ended in 2006.

Joseph was an avid sports fan; he loved New Jersey Devils hockey, New York Mets baseball, and Rutgers athletics and was a long-time season ticket holder for football and basketball games. He was a member of the Court Club supporting Rutgers men’s basketball, and was a fan favourite in his longtime section 118 at ‘The RAC’.

He also enjoyed golfing, particularly in his retirement. In 2006, he got his picture in the paper when he scored a hole-in-one on the 18th hole at Basking Ridge.

Joe also loved to sing. He was a member of the choir at Immaculate Conception Church in Spotswood, where he was a Communicant, and would most enjoy singing at Midnight Mass on Christmas Eve. He also enjoyed singing karaoke, and could often be found belting out his favorite, Black Water by The Doobie Brothers.

Joe was predeceased by his parents, Peter and Angeline Pavlichko; his parents-in-law Felix and Lucille Patello; his sister Katherine Reilly; his brothers-in-law Edward Reilly and James Dewan; and his nephew Peter Reilly.

He is survived by his beloved wife Deborah Pavlichko; son Michael, daughter-in-law Diane and grandchildren Charlotte and Ryan of Bound Brook; son Matthew, daughter-in-law Jennifer and grandchildren Isabella and Brandon of Monroe Twp; sister Lorraine of Jersey City; brother Louis and his wife Linda of Whiting; as well as nieces, nephews, and cousins.
Joe is remembered with great fondness by all who knew him.